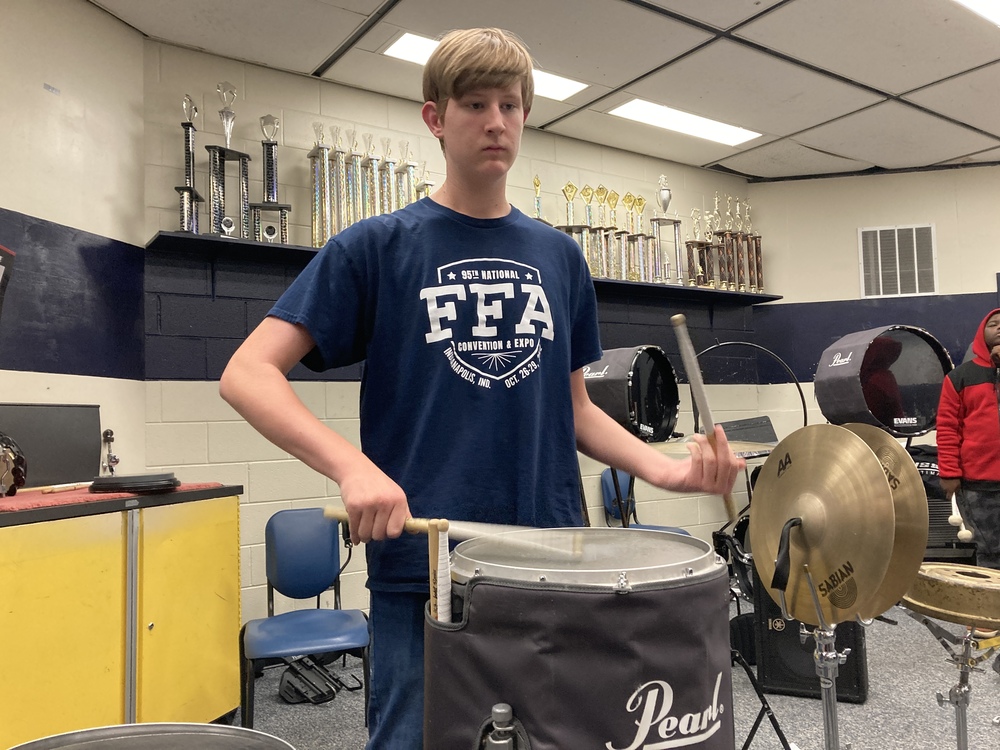 RHS Sophomore only one of two from North Carolina

WILLIAMSTON - One Martin County sophomore attended this year’s National Future Farmers of America Convention and had better seats for the event than he could have imagined.

The name Bennett is frequently used in relation to FFA activities, but that’s often in regard to long-time agriculture instructor Mike Bennett. In this story, he plays the role of proud father.

Sammy Bennett, who plays percussion in the Riverside High School band, was one of two North Carolina high school students chosen for 2022 National FFA Band, which is made up of FFA member musicians.

The younger and elder Bennetts packed up for Indianapolis and attended the 95th National FFA Convention and Expo October 26-29.

The audition began via video in July. In late August, the long-awaited email arrived.

“On August 21, I got an email that said ‘Congratulations, you have made it to the National FFA Band,’” Bennett explained during his band class at Riverside High School.

Long hours of rehearsal were quickly put behind Sammy when it was time for the convention to begin.

“It was great,” the Riverside sophomore said. “I felt really good to represent North Carolina, my county and my chapter. I don’t think there has ever been anyone from Martin County to go to the FFA National Band.”

“It was a really great honor,” he added.

And Bennett plans to go after that honor again next year. “Yes mam, I plan on doing it next year, but you can only do it for two years,” said Bennett. After that, he hopes to attend the convention and see what else it has to offer.

Growing up with an agriculture teacher father, FFA was a natural fit.

“I got into FFA last year when I took my Dad’s Ag Mechanics I class,” said Sammy.

“It was definitely interesting seeing him as a teacher instead of a Dad,” the younger Bennett laughed, “but the class was really fun and I learned a lot.”

The aspiring band director took great pride in representing his appreciation for agriculture and love of music in one event.

“I tried out for band and got on clarinet. Second semester that year we could try out for different stuff and I tried out for percussion and I got it,” he said.

“I was like no, I want to play clarinet,” said Sammy. “The band teacher asked him to try it for a week, if I did not like it they’d move him back.”

He never moved back. “I loved it,” he said through a tremendous smile.

“It was so great, that whole entire thing of taking drum sticks or a mallet in your hand and just being able to play with your hands,” he beamed, “It’s a beat.”

His aspiration of becoming a band director is a result of his work with RHS Band Director Alicia Cardwell. “She’s the reason,” he said - pointing to Cardwell as she worked with the band class.

“He struggled early on but always had a great attitude and wanted to work to improve. Sammy played bass drum his freshmen year, but he told me early on that he had his eye on snare drum,” she explained.

“He was not going to settle for no an answer,” according to Cardwell. “He has improved tenfold in the past year, mostly due to his own practice and perseverance. He is constantly seeking out other opportunities to perform.”

Cardwell explained Bennett comes to school early every day to practice, practices at home and watches videos on YouTube.

“He sought out the FFA band opportunity on his own without my help,” admitting she had never heard of it. “I am excited for him and his passion, and that he got to experience the band at a whole new level. Aside from all this, Sammy remains kind and humble and is always looking for ways he can help improve the band as a whole.”

Mike Bennett, who teaches Agriculture courses at the MCS Innovation Campus, was thrilled to accompany his son to the convention.

“This was an incredible experience for Sammy and the other band members,” he said. “They not only got to perform but also saw the convention from a backstage point of view which very few people get to do.”

Bennett continued, “One of the National Officers said it best when, as he was trying to point out to band members how special and unique this opportunity is, he told them that of the over 800,000 FFA members nationwide the band represents .01%”. He called the entire experience, “a special time.”